The original people living in Australia were not current Australian, but a group of people called “aboriginal” or “indigenous” people, who were driven by European explorers to current North Territory and South Australia. After many years, the Australia authorities became to reflect their faults, the famous speech made by Prime Minister Kevin Rudd in 2008, “Australia should to say sorry,” created a big splash and expressed deep introspection of Australians about the brutal White Australia policy that aimed at indigenous people. Personally I appreciate Australian government’s courage to admit mistakes in public.

Aboriginal cultures have a long history and their cultures are passed on by word of mouth or through rituals, handicrafts, dances or visual arts that have been passed down through generations. To commemorate Aboriginal culture, the Australian Post has issued a number of stamps. This includes the following first day cover, which was published on September 29, 1971, and named Aboriginal Art. The issue of the stamps was prolonged, and it was also related to the changing policy of issuing definitive stamps by Australian government. Before 1968, definitive stamps were replaced every three years. However there were so many stamps suggestions of different subjects, but people were only allowed to change once every three years, which thus created a contradiction. As a result, a new policy was introduced which allowed the short-term replacement of definitive stamps. Each set had three or four stamps and was allowed to be sold for for three months. This set of stamps were born, it mainly emphasizes the art of indigenous people, not artists. The stamps were originally sold as short-term definitive stamps, similar to today’s commemorative stamps, but due to changes in overseas postage, the stamps became long-term definitive stamps. The denominations of 20 cents, 25 cents, 30 cents and 35 cents were mainly to adapt to the current international mail postage, so that people around the world can know Australia’s Aboriginal culture. At that time, two authorities were responsible to audit the content of stamps, the Museum of Victoria and the Australian Institute of Aboriginal Studies in Canberra. Originally two of the stamp patterns were regarded as too sacred for the religious ceremonies they represented that they were abandoned to be present on stamps.

The final design by John Mason as the following patterns. 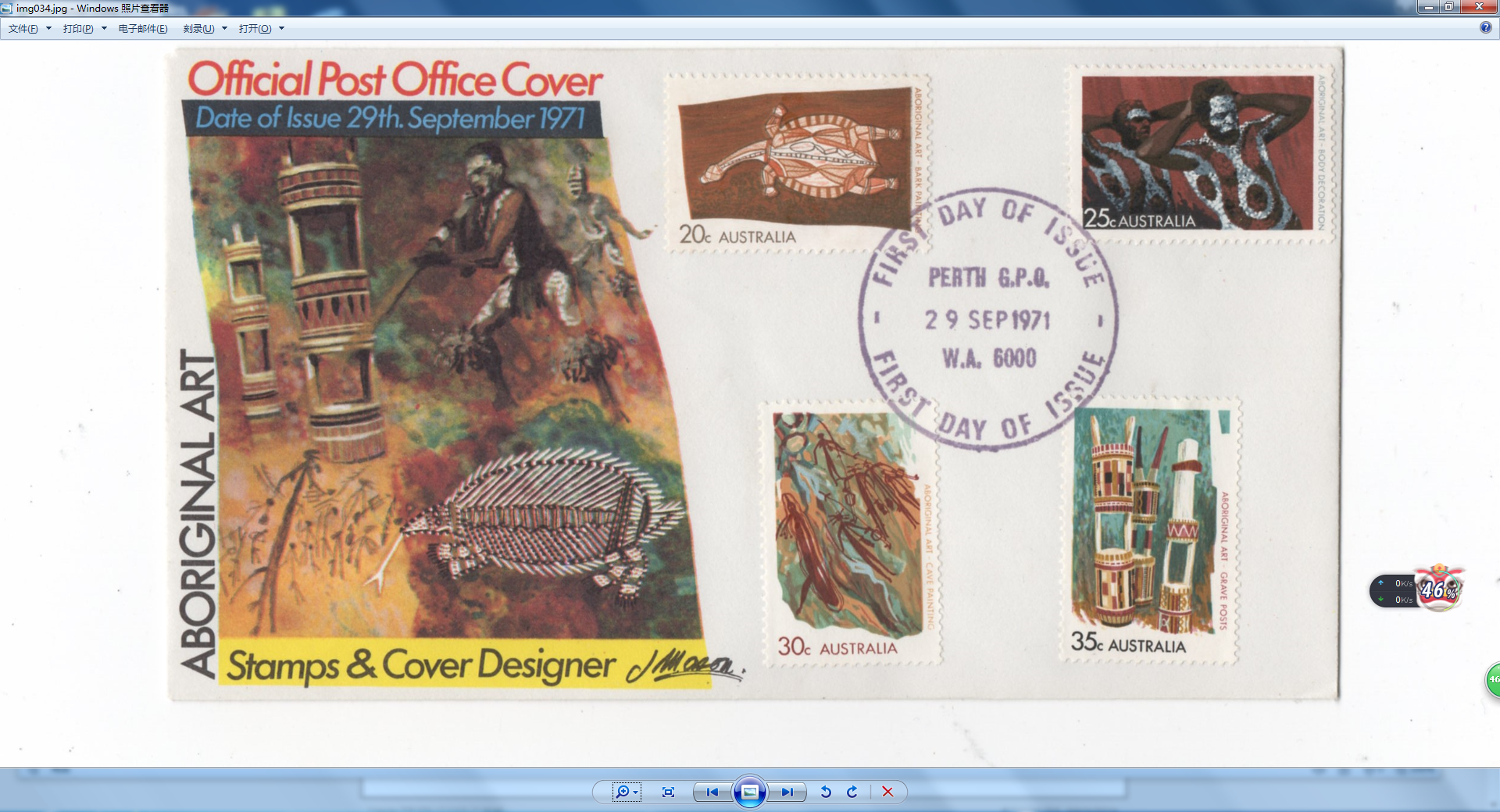 The bark painting of this long-necked turtle comes from the West Arnhem Land of the Northern Territory. The bark canvas usually comes from the skin of the gum tree, which is very tough. Indigenous people choose to cut a knot-free bark close to the root of the tree and leave the bark on fire until it became pliable. Then the bark will be put flat on a rock for painting. 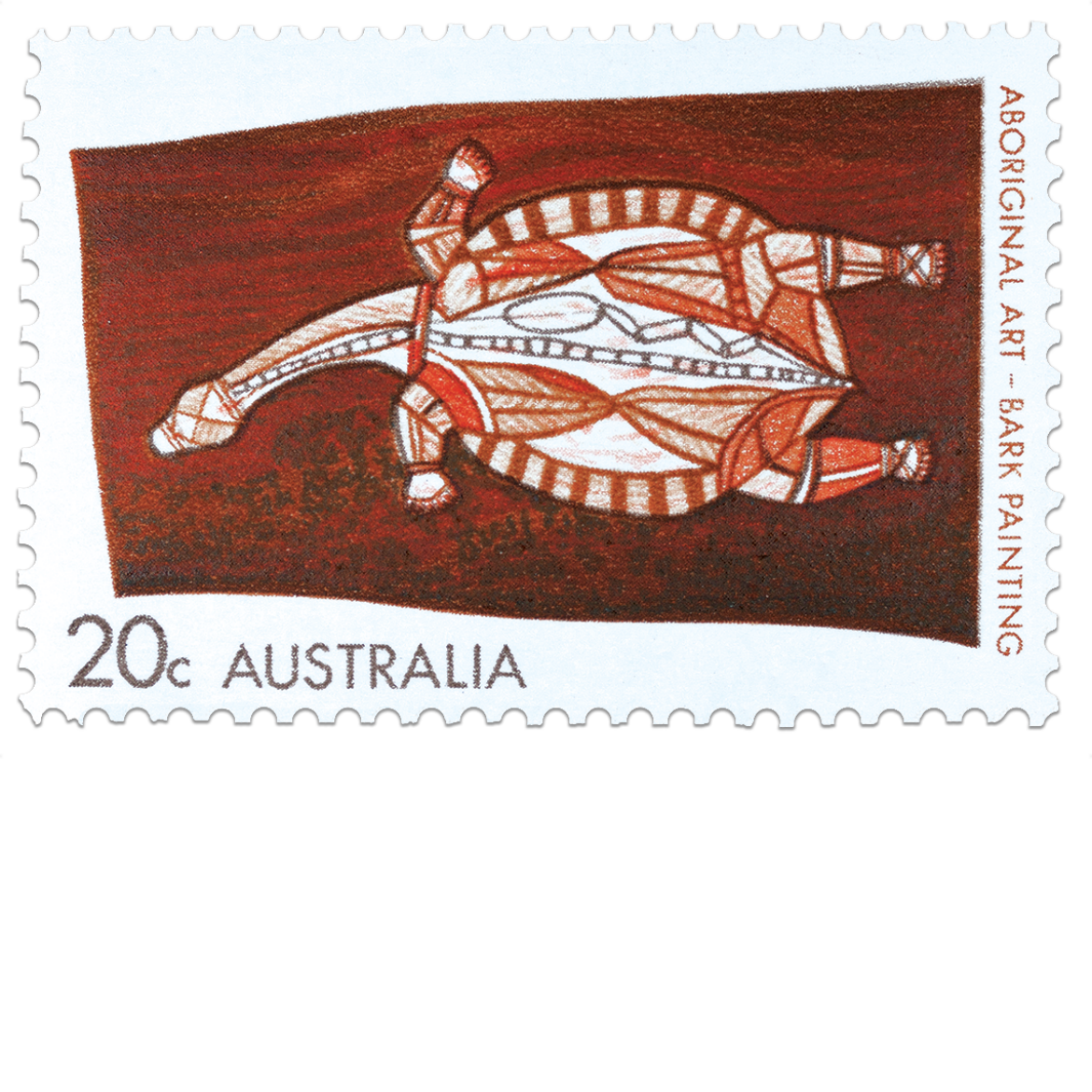 This is a body decoration. It was used by the Warramunga people in the Tennant Creek area of the Northern Territory of Australia during the mourning ceremony. This photo was originally taken by Sir Baldwin Spencer and then placed in the Victorian Museum to be collectible. You may ask who Baldwin Spencer is. He is a famous scientist, anthropologist, artist and there is an main road in the center of Melbourne which is named “Spencer street” after him. But this is not the original photo, and was revised to fit into policy. The original photo shows two men painting each other’s body and the leaders of the Australian Institute of Aboriginal Studies thought it is too sacred and should only fit for men to watch. After replaced by this picture, it is suitable for both men and women. 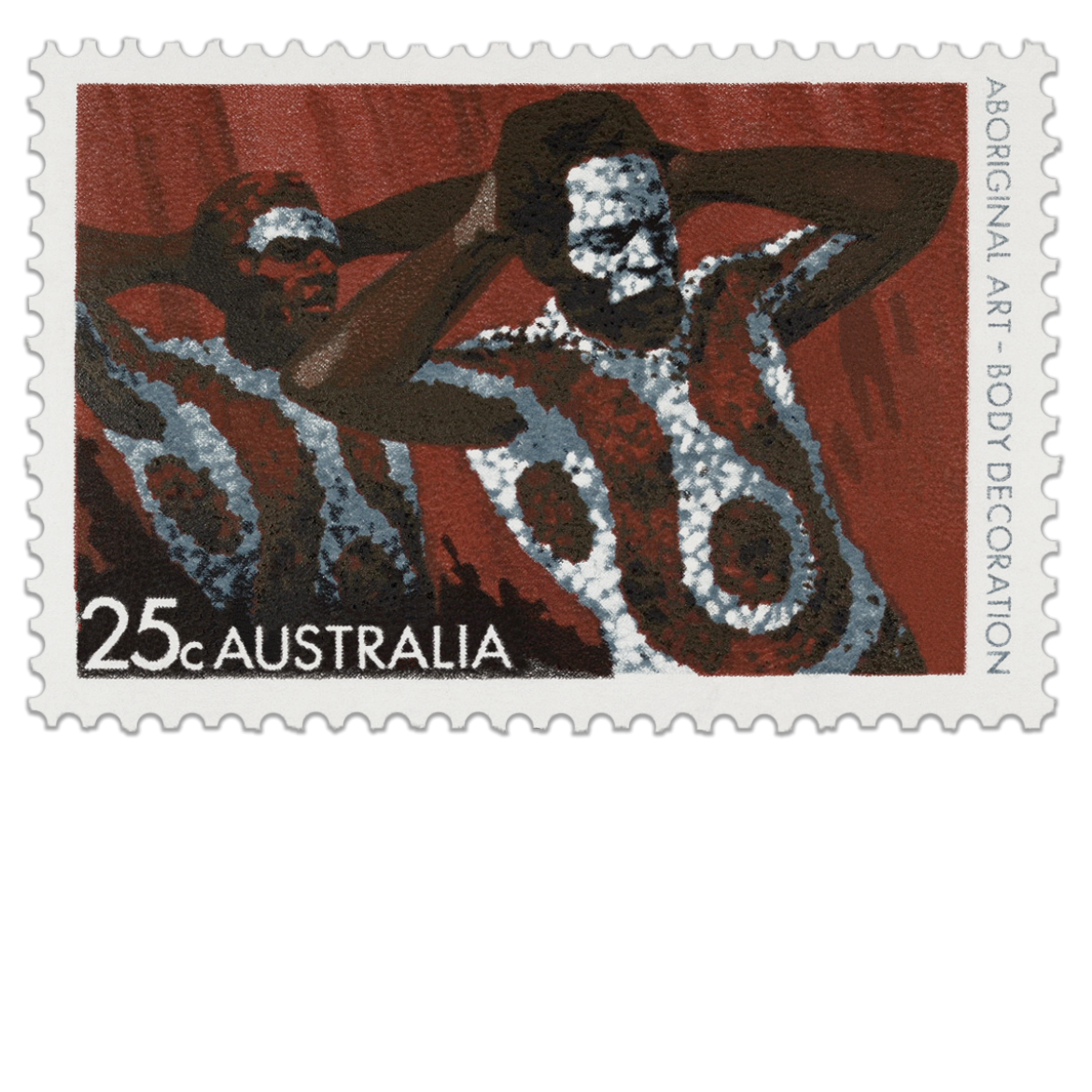 This cave painting was from the Oenpelli area of West Arnhem Land. Aboriginal cave painting art covers topics ranging from animals and humans to the legends in the era of their ancestors known as the Golden Age by indigenous peoples. These paintings, in fact, appeared not only in the cave, but also in the gorge wall or underneath the rock walls. In the West Arnhem Land region, these paintings range from the simple, straightforward model to the later colorful and abundant modes of performance of men and women hunting, dancing, and holding traditional rituals. 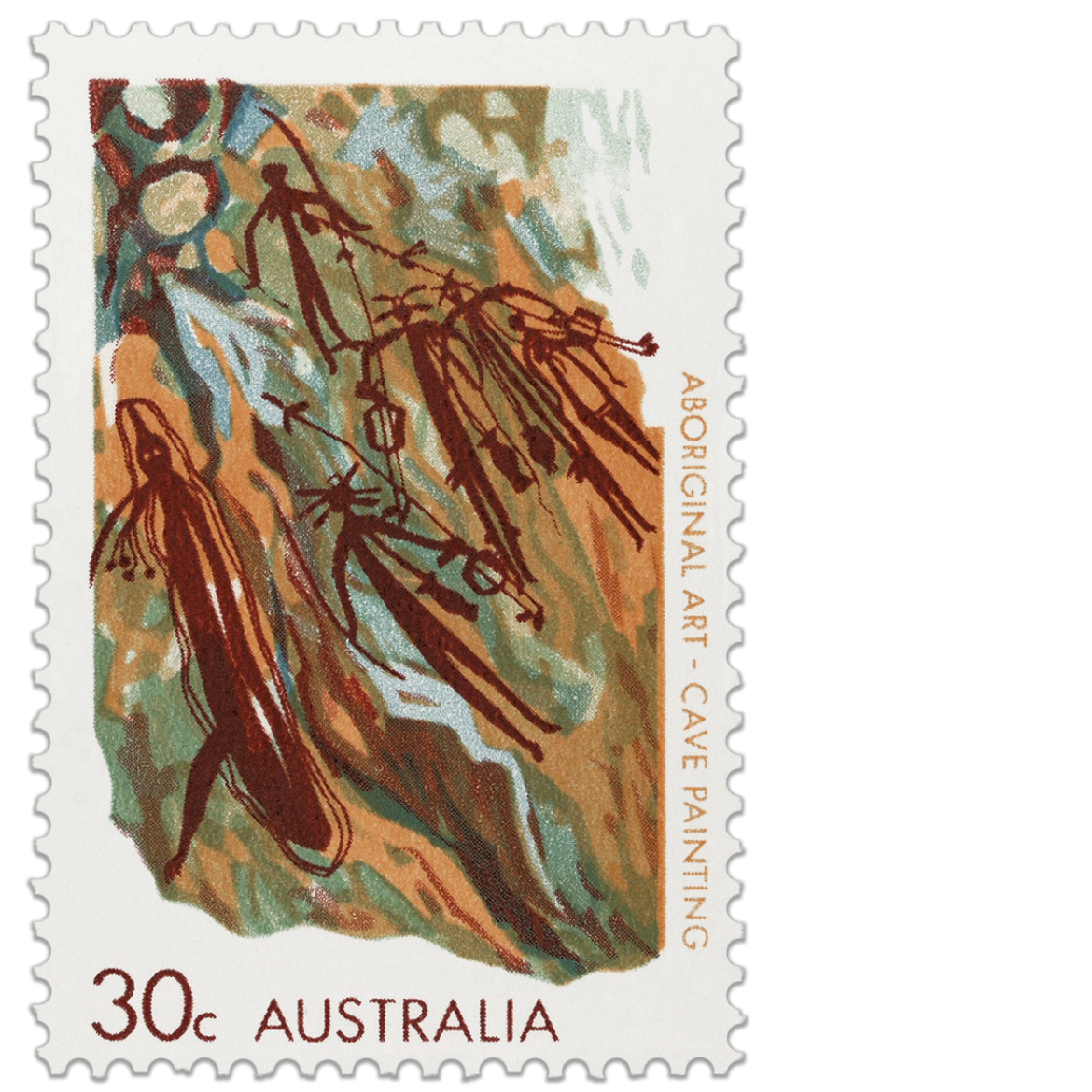 Grave Posts were usually used by people in the Bathurst and Melvile Islands in the Northern Territory to hold a mourning ceremony. These processes are documented by the National Gallery of Victoria. Decades have passed and this important burial ceremony is presented by the stamp, which comes from an local species of Ironbark and decorated with marks that represent ceremonial body paint or the scars acquired at the beginning of ceremonies. At the end of this pukumani ceremony, indigenous people erected columns around the grave. 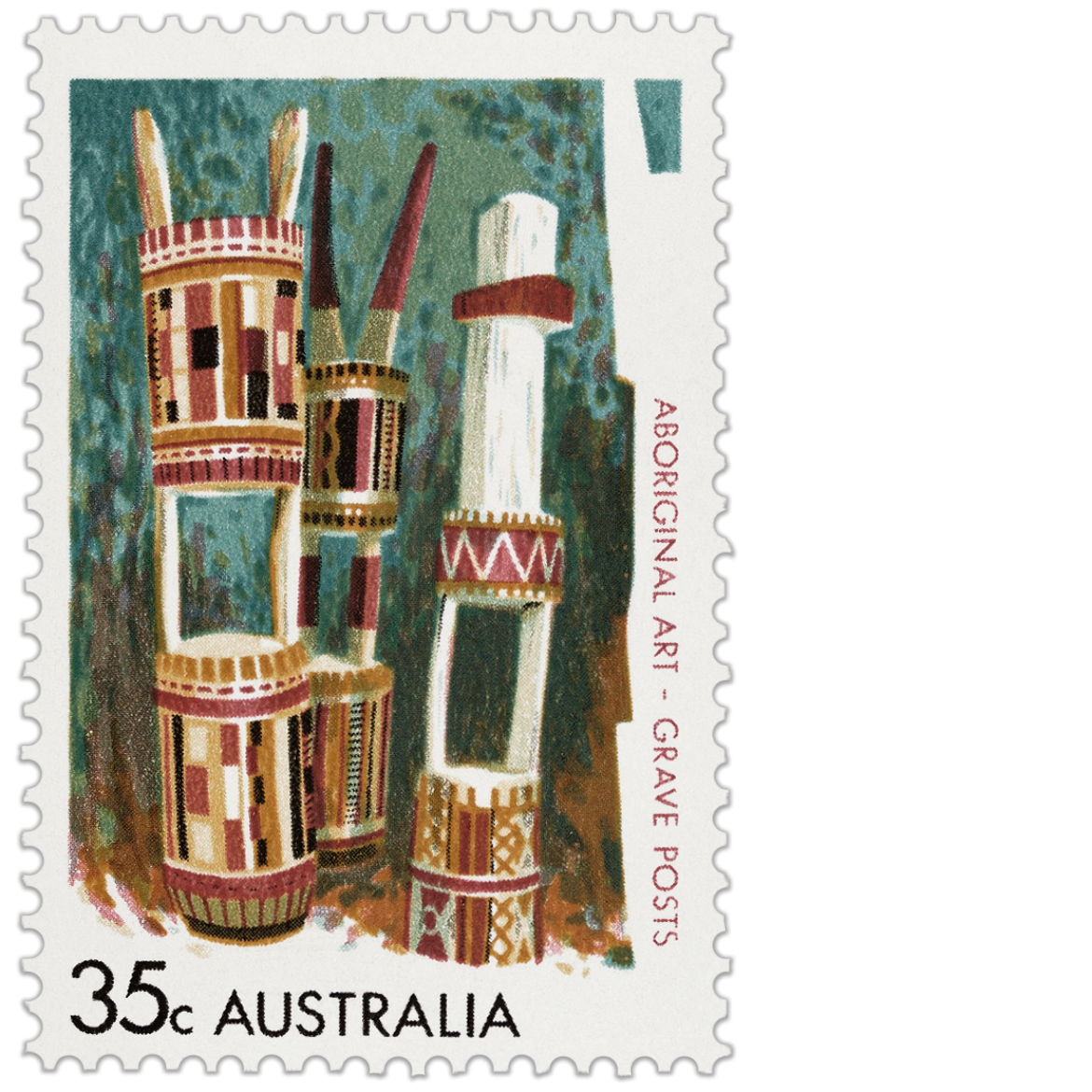 As I studied the background of these stamps, I was deeply acquainted with Aboriginal culture and found myself increasingly indulged in these stamps. Next time I will continue to introduce the story behind more stamps. I would be more happy to share with you, my steemian friends! 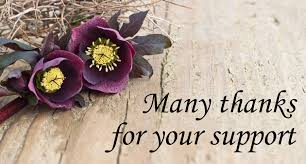