I have been practising Qi Gong since I was fourteen years old in Junior high school in China. My father was diagnosed as diabetes at the age of 45 or older. Then he heard there was a Qi Gong master named “Guo Lin” in Shanghai who was tutoring how to practise “Pick up Qi and pour into head (捧气贯顶法)”. The essence of this method is mixing people’s mind with Qi in the universe. My father witnessed many incurable diseases such as cancer, diabetes, late hepatitis were mysteriously healed by that Qi Gong master in a short while. Those miracles only appeared in story books, but never in reality, but he saw those with his own eyes! After a one-month intense training in Shanghai, he returned back. He was in an entirely healthy status in the first few days he was back. He kept on a good status afterwards although there was still recurrence of the diabetes especially when he was in a bad mood.

I was greatly influenced by this in my childhood. Guided by my father, I joined many Qi Gong training sessions and watched many videos presented by the contemporary Qi Gong Master Yan Xin, who is now living in U.S.A. Also I read various books on Qi Gong theory. I practised it intermittently all these years, during which I ceased for many years.

In the middle of 2015, I came across “Zhen Qi Yun Xing Fa” by chance; this Qi Gong method was created by a famous traditional Chinese doctor named “Li Shao Bo”, who passed away at the age of 106. I was very crabby and felt uncomfortable of my entire body at that time and was looking after something that could calm me down and let me feel better. “Zhen Qi Yun Xing Fa” came into my view at the right time. There are 5 levels and I went through them one by one, the aim was to attain level 4 which means I would get through my Ren and Du. I did it in 45 days. During these days, I squeezed 40 minutes each night to concentrate and also did casual exercises when I was walking or sitting. I did experience many mysterious feelings during the practise. I had a strong perception of the existence of Qi in the past, but this time I felt more. I am not sure if these feelings are directly relevant to Qi Gong, but after I ceased practising, it did not happen again.

The aim of most Qi Gong is to open the Ren and Du meridians so that illness and disease can be driven away from our body and people can maintain a healthy status. Zhen Qi Yun Xing Fa is the same. Ren and Du are the two main acupuncture meridians that run through the centre of your body, front and back. Together they are called the small heavenly orbit or something like Xiao Zhou Tian.

My experience proves that the state of our mind can effectly affect the health of our corporal body.

Step one: calm down myself, breath in and out in a natural way. Concentrate on the stomach position while breath out;

Step two: after days, I felt a stream (like vibration wave for me) from stomach to underbelly; still focus on stomach while inhaling, until the feeling of stream becomes stable and the Qi becomes stable in underbelly, then it is time to move to step three;

Step three: calm down myself, concentrate my mind and focus on the underbelly (Dan Tian in Chinese). This is the most time consuming stage and the critical way to get through Ren and Du;

Step four: this should happen naturally and it might never happen to some people for years or forever. Weather it happens or not depends on step three. In this step, Qi was abundant in my underbelly and they went down to my “Hui Yin” which is perineum between your anus (rectum) and your genitals, then upwards along my spine and to my top head, following the middle line of my body, they go from top head to the point my tongue and roof of my mouth touched, then downwards until they reached my underbelly to fulfil a cycle.

Step five: This stage happens naturally and it never happens to most people. It only happened to me intermittently. In this stage, all the Jing Mei (meridians) in our body will be dig through gradually. After focusing on underbelly for a time, our brain will naturally go into a state of void. There will be light appearing in the forehead and it will become stable.

I achieved step 4 and partly attain step 5. All these steps need concrete description in the subsequent posts to retrospect my personal experience. I have not been able to practise them since the beginning of this year due to something I cannot stop myself from being infuriated. Anger is a real enemy of Qi Gong and with that mood in mind, Qi Gong can hurt me more than benefit me. Controlling my mind is much more difficult than to perform this traditional Taoism.

However, those practise gave me so many wonderful feelings in the last year, I missed them so much. I would like to pick it up once more. 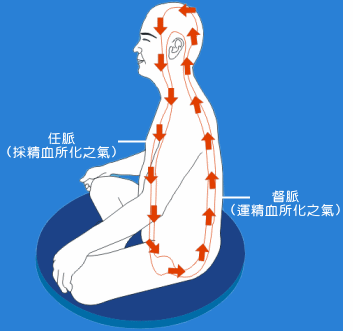